Every now and then, I’ll meet someone who comes to a full stop when I tell them I’m a novelist. “What?” they’ll say. “A novelist,” I’ll say, and then, because I’m super helpful I add, “I write fiction.” “Wow,” they’ll say, “Really?” “Really,” I say, trying to will the tics from kicking in.  “Have you published anything?” they’ll stutter next. “I have,” I say. “Wow,” they say, relieved, “Good for you! That must be so much fun!”

At which point I usually fail colossally in holding up my side of this particular type of social exchange and make some sort of mildly subversive, slightly dejected attempt to explain how much work being a literary novelist in 21st century America can be.

But what I wish I had the courage to say is this: “Yes. It is fun!”

Because the truth is, it is fun. And that’s an important truth. In fact, it isn’t just the fun of novel writing that inspired me to devote as much as I could to it long before I ever had a hope of being published; it’s the very fact that I do find my work fun (among other things) that proves, in my mind, that it’s the most important work I could do.

So many of us hold ourselves back from admitting how essential fun is to good work. We think of fun, and we think of goofing off, taking valuable time away from work, playing hooky from our real responsibilities. And yet we wonder why we get stuck in our careers, why we no longer generate the great ideas we had when we were young and simply thrilled to have a job, why we obsess so much more over what isn’t working than what is.

Somewhere along the way, I think we made the very grave mistake of conflating dedication with seriousness. We got very fearful of ourselves, and became convinced that if we let loose on a regular basis, we would fall down the slippery slope of being unproductive, slothful, and generally out of hand. Even now, as you read this, I’m sure it’s making you a little uncomfortable. Heck, it’s making me a little uncomfortable to write it. I don’t want you to think I’m encouraging everyone in the world to take their tops off in Times Square and go for broke. But I, too, need to be reminded of the difference between having fun because it’s a healthy and natural part of the human mind’s impulse to be engaged and thriving and thrilled, and a tendency to behave like a drunk teenager on perpetual spring break.

Of course it makes sense that no one will get anything done without dedication, a ton of grit, and a healthy dose of good sense. But by the same token, we can’t expect to get our best work done if we’re not flourishing. After all, is joy really something we need to actively avoid? Is that why we’re wired to seek it? Why it makes us feel more powerful, more flexible, and more creative? And if we’re constantly playing Whack-a-Mole with activities that invite joy, fluidity, and creative fast balls, how can we expect to produce in the age of innovation and invention? A related question: When have personal flourishing and success ever really been at odds with each other?

Where I live, in Silicon Valley, people have a lot of fun. They’re mocked for it regularly; but they keep doing it. Sadly, no one here is doing anything worthwhile or interesting, and we’re all dying early of heart attacks. I miss the Boston that raised me, but sometimes I think I had to come out here in order to really embrace the person I most needed to become; the fullest, most ridiculous(ly productive) version of myself.

The photo I’ve shared with you was taken when I was around three years old. Fun fact: I recently discovered that my family has been showing me only the “pretty” pictures of myself when I was little; much to my delight, I found a treasure trove including this one of me looking like a miniature Latke Gravas on the days he forgot the Brylcream while going through my parents’ storage locker. The truth is, I knew I always had a miniature Latke Gravas inside me, and it saddens me that I ever shut her (him?) up just so I could look a little prettier, appear a little more somber in my family of full professors and widely respected doctors. And for the first three decades of my life, I did manage to fake it in the world of Serious Work. But look at me here, at the typewriter, with my sunglasses upside down, frisbee at the ready — in my natural state. I see this photo and I just think: Thank God that at least I eventually remembered I was supposed to have fun. What’s more, I suspect we all have such photos in our archives. Where are you in yours? What are you doing? Have you ever felt more genuine or more engaged? Is it really so far from here to there? 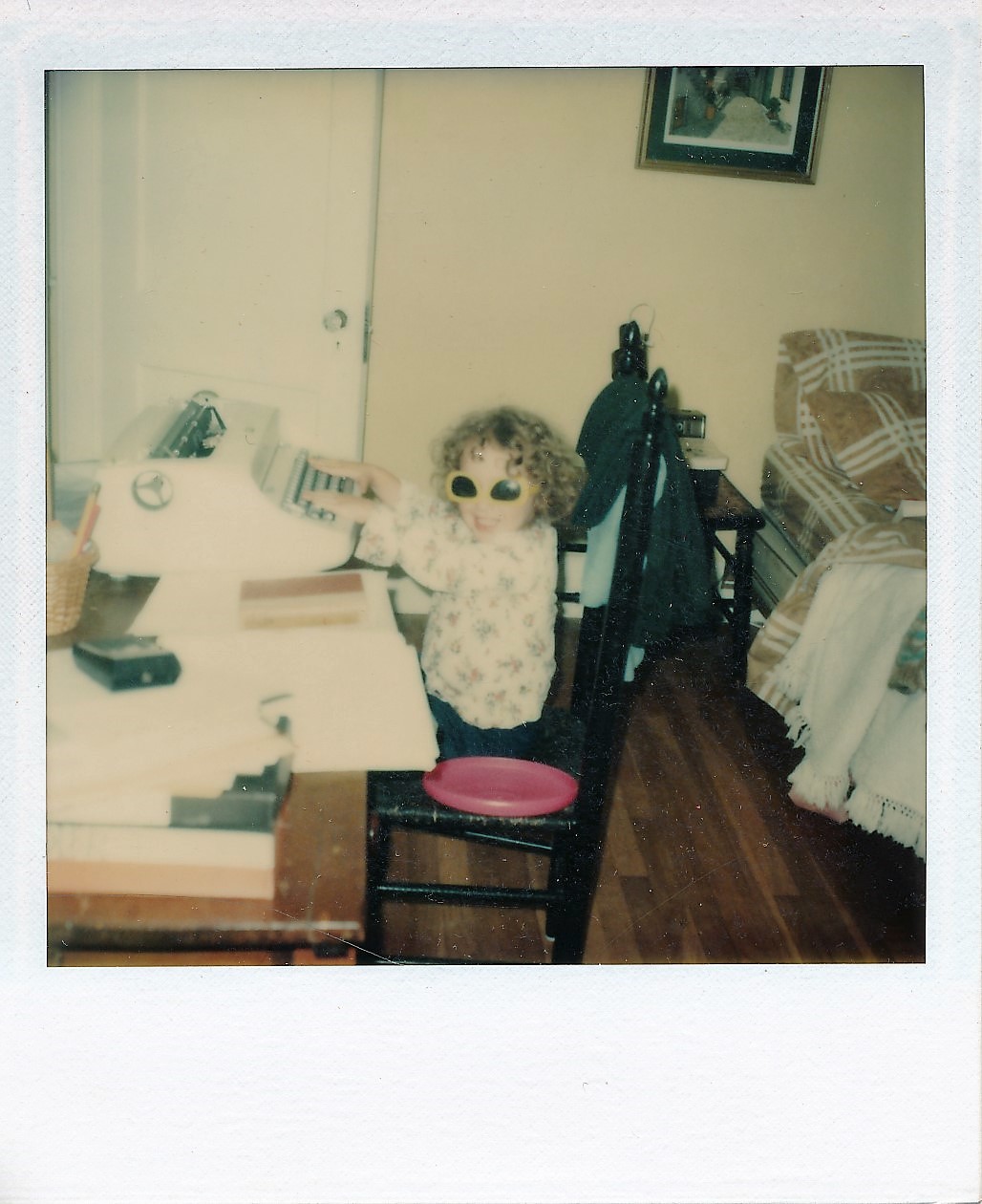