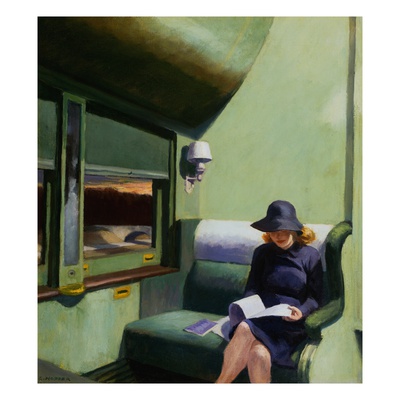 There’s a certain ‘tude hard to miss if you spend any time in writing circles. It usually crops up after a writer who is not handling criticism very well that day shuts down and throws down the following equally defensive and offensive statement: “Well, it [your critiques/how my work gets read/anything you do or say from here on out] doesn’t really matter. I really just write for myself.”

I’d like to call foul on this phrase. I think it’s a hangover from the mid-twentieth century, a sort of lingering psychological tic – if you will – from the days when our collective social idea of a writer hinged on some paradoxically privileged and poorly socialized white male. And on the surface, it seems relatively harmless. I think this is why it continues to slip by. After all, it’s good to write for yourself, right? Who wants to write for other people? We’re artists, after all! Screw The Man! Let’s go howl at the moon and write some more stream of consciousness, preferably drug-induced!

I used to swallow this romantic delusion just as willingly as the next writer. I used to even admire it a little. There was this one sailor (not joking) in a writing class I took in graduate school – a sandpapery-cheeked, blue-eyed, red-skinned chunk of human solitude who used to say this, and I would nod solemnly and admiringly. But that admiration came at a cost then and every other time I encountered a writer who declared this or a workshop leader who encouraged it. Why, I used to berate myself, do I care so much what other people think? Who am I aspiring to be, Danielle Steele or Sylvia Plath?

Well, neither, as it turns out. But it did me no good to think that if I didn’t give a rat’s ass about what anyone thought, I’d be a better writer. In fact, I think it’s just a cop out to say you don’t care what others think. An easy way out of one of the many social contracts we all love to hate.

But why on earth would you choose to create art in the medium of language, the very medium of communication, if you really want to just go live a hermit’s life in the woods? While all of us are certainly trying to write our own work in our own voices and from our own perspectives, I don’t think one strives to be a writer because one wants never to be heard. Are any writers really trying not to communicate?

Certainly, we don’t want to write what we think others want to read, and given the fragile state of so many socially-marginalized artistic identities (my own certainly included), the temptation to win friends and influence people sometimes needs to be beaten back with a heavy stick. Yet while I certainly agree that we can’t write well if we’re writing for someone else, I do think that writing is a fundamentally social act, and it flourishes when it’s treated accordingly.

It might seem ironic, but this realization – that I am not writing just for myself – has made me go deeper when I write, to seek those profoundly resonant truths that sidestep the false and the glib and the appropriation of other voices. When I was studying poetry, I came across the idea that writing something incredibly specific and true is oftentimes the gateway to saying something universal. In other words, when we’re very truthfully and bravely writing about what we see when we look out into our worlds, we’re most likely capturing something that other human beings want to recognize as true and brave. One of the most beautiful and truly weird things about being human is that we are all individuals, and yet we share the same emotional brushstrokes. We all want to love, and we all eventually encounter the challenges of loving well. We all experience the fleeting qualities of life, and yet we can find life unbearable at times. We all want to express ourselves, and we all know what it feels like to be unheard.

So yes, trying to write beyond yourself — to communicate and touch others and expand our universal conversation — is probably ten times harder than writing for yourself. But I do think it’s also ten times more rewarding. Because when you have the courage to shape your work so that it might genuinely be offered to a reader, to maybe see where your words are not quite managing to say what you mean and to go back and rework, to keep offering and working until you see a reader light up with that indefinably rewarding spark of recognition – you reap so many more rewards than solitude and intractability can ever possibly offer.